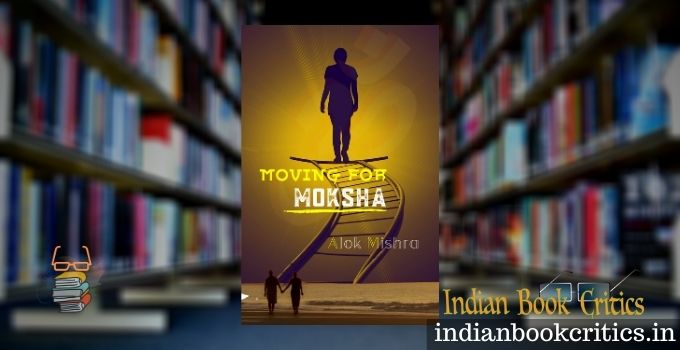 This is the second poetry collection by Alok Mishra, an Indian English poet, after his first one which was published back in 2018, October, 13 untitled and weird poems. Moving for Moksha takes the narrative of poet’s disillusionment with the world further and this time, unlike the first poetry collection, the narrative tries to settle itself with a definite conclusion which has been tried to establish in terms of Mukti, Nirvana or Moksha. And therefore, this collection will most likely feel like having a beginning, a development and then a conclusion which makes it complete – giving solace to the readers who were left in a state of deliberate confusion with the previous collection.

Moving for Moksha begins with the narration of a possible heartbreak that has been shown to have an impact on the thinking of the subject in the poems. However, the impact is only temporal as the subject (unnamed) in the poems realise things which are bound to change and the things immortal and stable and permanent. In the very first poem of the collection, which is placed just after the first suggestive graphic of someone falling from a cliff, the readers can get the idea of things about to come later, in other poems.

“I stood comfortably
to look below.
My dreams shattered and broken
but lighter somehow, and so
I moved on.”

It’s about moving on and moving until the ‘destination’ is realised. As a reader moves ahead, reading the poems, he will realise that the poems are composed with a strict form that creates a certain impact upon the readers’ psyche, not lyrically but intellectually or emotionally or both, depending upon the interpretation and the situation embedded in the poems. Just after reading the first poem, a reader will realise that no fall is deadly if you look below after taking the fall… you may realise what is permanent and move on. So, the pain which might make someone suffer otherwise has been belittled and subdued into the corner.

There are 14 poems in the collection and each has only 13 lines with a strict pattern enforced – 4-3-6. However, there is also one more distinct quality that must be put out. Right from the second poem in the collection, every poem begins with the idea taken from the last line of the previous poem. For instance, the first poem ends with the subject moving on after being left with a feeling of disillusionment and dejection, moving and the second poem begins with a note of Moving on and ends with the subject feeling as if he escaped from confusions and the third poem begins with a note of Escaping… so, the poems are well-arranged and also, the most surprising or wonderful thing comes at last when the readers realise that the titles of the poems have been joined together to form a complete poem! This was surprising but wonderfully and pleasantly done.

The poems, unlike the previous poetry collection by Alok Mishra, are bright, lucid and clearly spiritual in tone. Much should be owed to the rich mass of ancient literature that we host and boast. However, the poet has also taken his references and analogies from the ancient Greek myths, at times. The fusion that has been created, at times, in Moving for Moksha, looks wonderful but might demand too much understanding of the ancient scriptures and mythology from the readers.

“We exchanged our Mutual pain; how insane?
I signalled my soul to wait, not to drink from Lethe yet;
it was September, I took an objective leap of faith.”

Mystic in nature, the narrative does suggest that there is someone else with the subject, perhaps a second romantic or otherwise interest. However, the tone and content of the poems do betray this perception that I (or any other reader) might have in mind. Why would the poet conceal? Why would the poet reveal? The readers are left with many thoughts, in the end, but they do conclude the collection with a certainty that mortals are to be submerged with the only immortal reality. Things become rather clear once we tend to understand the poems by scrutinising the attached images, before the poems themselves. The poetry collection contains images for each of the poems in the collection.

The title and the cover image may be explicitly suggesting the content of the poem but it is not what we see. A reader does have to trade his intellect to understand the definite ideas in the collection. Moreover, it also becomes certain that the modern bench of Indian English poets is not here to sit down and copy what others have done. They do have their own journey to take and it feels good to realise. You can read the collection by grabbing your Kindle copy from Amazon India and finish it in one go! Click the Amazon link below to get your copy of Alok Mishra’s poetry collection.

Review by a Gunjan for Indian Book Critics

Moving for Moksha is a collection of poems that you will be intrigued to read and after reading as well… a must-read for poetry lovers! However, before you read it, make sure you are interested in mythology, religion and spirituality.