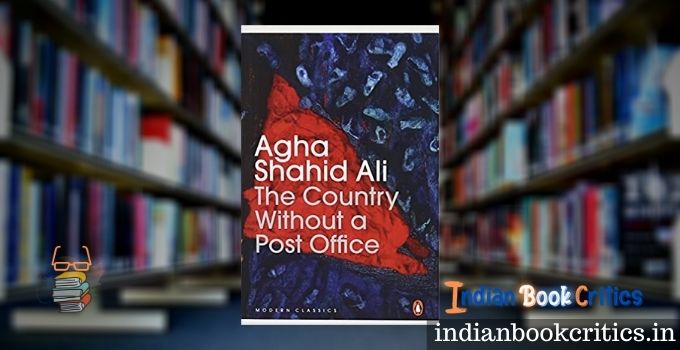 The Country Without a Post Office, a so-called acclaimed poetry collection by an American poet, who touts himself as a Kashmiri, has too many things to express and too many things to hide, in a subtle way, though. As a poet, the Agha Shahid Ali does understand meters and rhymes, metaphors and analogies which are rather apparent. However, as a poet from Kashmir, what he misses is the plight of more than millions who were butchered by their neighbours, raper by their acquaintance and pushed out of their land by their compatriots – the plight of Kashmiri Pandits does not find any significant place in the collection by the poet even though he has given ample space to the years 1990, 1991 and pulled it up to 1994… is that justified? Well, for the critics who have their own (and natural) bias, the collection is all about going gaga over freedom struggle of Kashmir – which is misplaced and confused, at the first place – and they may find it competing with the Bella Cio song by Spanish resistance fighters as well…

The collection has been divided into 5 different parts and The Country Without a Post Office comprises of prose works as well. So, there is plenty to read, no doubt. However, the poet’s claims in his verse and that by his ‘critic fans’ in their critique fall flat on the ground of reality once a reader goes through the verse critically, keeping in mind the instances put in the poems and comparing those with what happened in actuality.

The poems look more prosaic, apparently, and it does not take away anything from the poet’s poetic talent. However, there are the poems that communicate instantly to the conscious of the readers and you can, perhaps, feel what the people being discussed in the poem might have been through. For instance, look at these lines from a poem entitled Ghazal on page number 26:

“In the heart’s veined temple all statues have been smashed.

No priest in saffron’s left to toll its knell tonight.”

Well, also, this is one of the very few instances when readers will be introduced to the pain of those who suffered actually, in pieces that are too tiny but powerful, at times. The poem has rightly been called Ghazal because there is a refrain – tonight, at the end of every second line in the poem.

Talking about the poem’s (yes, it’s about one poem in the collection that became famous for obvious reasons) relevance, critics and scholars, authors and activists as well as political leaders have shown their deep interest in the poem The Country Without a Post Office because it talks of the pain of Kashmiris… however, the poet has been highly subjective while expressing his opinions and ideas. He sounds more like a separatist, at times, threatening to take Kashmir away from India – concerns for diaspora take the back-seat, as usually happens with poets and authors living outside India with fully-fledged citizenship in other countries.

The poetry by Agha Shahid Ali is not popular or celebrated because of poetry in it. It is celebrated because of the ideas expressed and celebrated by a certain faction only. Had the poems been poetically beautiful and complete, we could have known of them as we know the poems by Naidu, Aurobindo or Tagore or even Nissim Ezekiel for that matter. Agha Shahid Ali’s collection, The Country Without a Post Office, fails to come out of self-righteous victimisation and enter into the world of free-flowing poetry. And therefore, if you are not a Kashmiri or if you don’t take very much interest in the politics of Kashmir, there is no ‘truth’ for you in these lines. And poetry? You might have to hunt for that… with a blindfolded pair of eyes. All the best!

Review by a critical reader for Indian Book Critics

The Country Without a Post Office is about ideas, one-sided narrative and a glimpse of truth… coming out of Kashmir, dipped in ink that was prepared with the blood of unknown, in millions, who were killed, raped, butchered, exiled… are you ready to find out the truth? You may not…