The Poetician: A Common Man’s Satire by Lov Pathak – Review 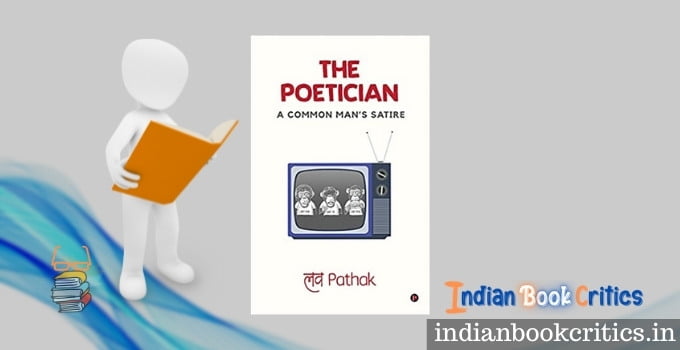 If I have ever seen someone entering into the enemy territory and beating the hell out of them before coming out alive and kicking, that was during the Trojan War except for the massive casualty in the form of Achilles and another being this one – Lov Pathak writing in the Roman script but in the Hindi Language and throwing drock-kicks one after another on the language that this script mainly represents, English. These lines are taken from his poem Hindi Medium Ka Chatra and the collection of the poems is called The Poetician: A Common Man’s Satire. I like the title. I like the idea. I also like the style of his free-style writing that does not fear any rhyme or reason. Without caring for so-called literary standards, the poet has given it out in his clear way. Frustrations as a common man, insecurities as a job-seeker, troubles as a conscious citizen and some random bites from the grand composition called life… this is what this is all about!

First of all, I would like to congratulate the author for his courageous decision to write in a language that everyone understands and write in a script that many use every day. So, The Poetician is not out and out Hindi and neither English. It is somewhere in between but with the same force and fervour. Lov has kept his poems very close to our daily expressions and experiences. His momentum is very much at par with what we are accustomed to. He questions the very existence of things, the ways and behaviour we come across, the things we do and encounter every day, the things we did in our schools and colleges, the things we do to get a job and promotions… Do we want to escape? At times, yes. And the poet has captured that experience as well.

There are amusing but realistic poems, there are pinching but realistic poems, there are emotional but realistic poems… and you see, the reality is at the centre of everything that Lov has written in his collection. He writes about extinct species of birds and animals, about trees that are vanishing, about issues that never go down and about solutions that we have tried but failed. With every aspect of his works, we can easily relate and think. The poet has been successful in making the readers think of what we often ignore as someone else’s issues. And the poet asks us all, why?

Yes, except for a little innovation and a little too daily-linguistic in action, there is all seriousness in The Poetician and it will surely attract the attention of the readers once read. I would suggest the title should be read by every reader who is curious to read some crude satirical attempts at our contemporary lives. You will be surprised and also satisfied that finally, a poet has chosen the way that actually hammers our conscience and asks tough questions to us.

You can get a copy of this collection in paperback or Kindle formats from Amazon India. Click the link below:

The Poetician: A Common Man's Satire by Lov Pathak – Review

A poetry collection that is innovative, compelling, exciting at times and also very realistic with the experiences, thoughts and emotions shared by the poet. Do read it!