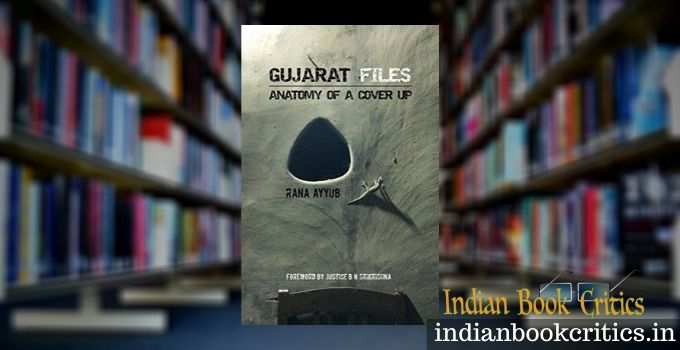 Gujarat Files, an un-aesthetically elongated vendetta, forcefully turned into a book with animated proof of ugly writing and hasty editing, is a book that most of the readers must not know. They are fortunate because they don’t have to take this unnecessary pain of going through a book published with political co-ordinates in mind and brainwashed readers as the target audience. If you don’t fit into the framework that the author, Rana Ayyub has decided as her ideal readers, you will easily catch the book’s sheer absurdity and you can easily understand that this is fabrication without substance, an emotional howl that goes beyond natural depth. Let’s break down Rana Ayyub’s over and stupidly hyped book Gujarat Files: Anatomy of a Cover-up.

“In 2007, three of Gujarat’s top cops were in the news after they were arrested by one of their closest colleagues Rajnish Rai for having killed Sohrabuddin, a small-time crook, in a fake encounter.”

With eggs on the face, many more eggs on the face and numerous eggs to be thrown on her face, how can such an author boast of her ‘authority’ when she starts her book very much with prejudice, a bias and a partisan announcement that is based on no evidence at all. Moreover, her claim of such a case being ‘fake encounter’ has been punctured by the Apex Court of India in 2017. For this confused author, a ‘small-time crook’ should not be bothered just because he had 40 AK-47 rifles in his possession and had more than 50 cases pending against him. Where were those facts, journalist? Why did not the author of a demerited Gujarat Files give entire context to the readers?

There is a very apt expression by E. M. Forster, another hypocrite who wrote many ambiguous works, that tears down his own writings as well as all others who write with certain dubious purposes. Forster writes:

“Books are composed of words, and words have two functions to perform: they give information or they create an atmosphere.”

Gujarat Files, very aptly, create an atmosphere rather than giving out any information to the readers who may be interested in knowing more about the riots of 2002, propagated as anti-Muslim riots by some for obvious reasons. However, Rana Ayyub, unfortunately, has stooped as low as her recent remarks and tweets are. She did not even mention the barbaric incident of a few people from Muslim community burning a train coach causing 59 deaths of Hindu pilgrims returning from Ayodhya and also more than 50 were injured. The Muslim mob was about 2000 in number – why did the author omit such heinous but important details from her book? Such easy giveaways should do more than enough to tell serious, critical and wise readers that Gujarat Files is even more than a mere propaganda piece of literature. Such authors lull particular readers with a certain bias to intellectual sleep and brainwash their minds with hypothetical and imaginary scenarios so that their shops of religious sentiments and absurd ideas keep running. The practice of such writing is not new.

The author has cited various secretly recorded videos so many times with so many different people including politicians, IAS officers and police officers. However, the apparent makeover of the conversations and an unnatural tone of the answers to the questions (she claims these to be exact words, how?) can easily be said to be botched up attempts at creating an atmosphere that favours the baseless allegations made by the author against the current prime minister of India, Narendra Modi. It was sheer arrogance of the author and her aids in propaganda that they had once requested the Supreme Court of India to accept Gujarat Files as fresh evidence in an interest lacking 2002-related case and open a fresh re-examination. As it had to be schooled this way, the Supreme Court outrightly rejected the petition and vehemently reprimanded the petitioners bashing the book and the author to the last visible threads. Nevertheless, such people don’t learn any lesson in life even if life is teaching them all the time. Rana Ayyub, the self-published author of Gujarat Files, claims that her book has sold more than a million copies! Really?

And to put the final nail in the coffin of this propaganda, politically and personally and even religiously motivated book, or rather a hate-filled, perennially filled with hatred for a person who, unfortunately for her, has been awarded by the Muslim countries with the highest possible awards, piece of literature, the ending just uncovers the shroud of journalistic courage from the book as the author gives it away, rather hopelessly, at the end so that the readers have gone through all the made-up and imaginary allegations and conversations:

“Maithili made an exit forever that day. The editors took a call that the investigation would not be published.”

Tehelka, whose founder has been charged for rape and sexual crimes, Tarun Tejpal, who is currently out on the bail, one of the first #MeToo culprits even before the movement uncovered, denied publishing the tapes or the stories in their magazine. Could a sensible reader believe all this butchery of facts and narrative in the name of authoring a book? I have read more than enough books of journalistic nature and I know how things work. I have been reading the best and the worst of literature even before Rana might have learnt how to do propaganda properly, without getting apparently caught on the back foot. She Said by Jodi Kantor and Megan Twohey is a wonderful book which one might read and understand. Gujarat Files, being honest, must be remembered as a blot on the genre of journalistic literature because it just doesn’t offer any evidence other than personal opinions and stories made in one’s mind. Why and how should a reader believe her? The nothingness that was not there could not be planted even with all the powers that be resting with the UPA government for 10 long years and you must remember that the CBI used to grill Modi for days… Something that professional investigators could not establish even with political pressure… Rana Ayyub says she has done by changing her name, hiding a camera in her dress and just casually talking to people who did never agree to her claims!

To end the review, I would say that no reader should invest his precious time reading this book. This book is just an extension of personal hatred and imaginations. The same people who author such books ask for evidence for almost everything they find uncomfortable for their narrative. However, when it comes to providing proofs for their claims, you just need to believe them! WHY?

PS: The book is horrible. In terms of language, selection of words and editing!

Review by a contributor to Indian Book Critics

The author needs to learn grammar, basics of writing and also a lesson on how to conceal one’s personal propaganda and innuendos in a public piece of literature.