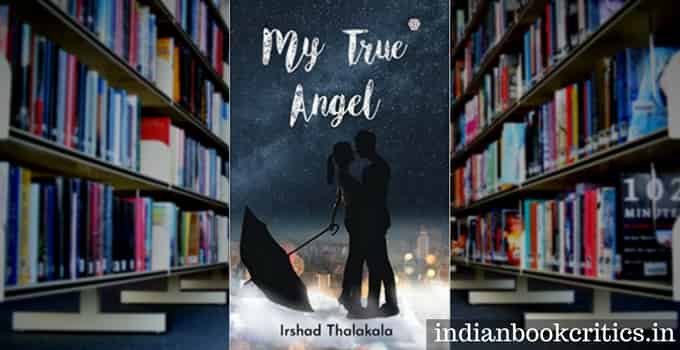 Reviewed by – A contributor to Indian Book Critics

How would you manage yourself if you have three beautiful women standing near you and you have been in love with all of them at some point in your life? Will there be a breathing space left? The protagonist in the novel, Iqbal Abdulla, has managed the same situation in this novel – Rubina, Payal and Naziya – the three women he loved and the last one was engaged to her – come to see him when he was in the hospital. The scene created by text looks amusing but has great symbolic significance as well. Our society and our parents and we ourselves as well, create so much confusion around us on the petty issues that living a life with free will becomes almost impossible! My True Angel by Irshad Thalakala is a novel which tries to address the issue of social evils which prohibit human beings from getting closer to human beings – religion, class, creed and status – many things help in creating that gap which is not bridged by our attempts. With a few issues that debutants often face in fiction writing, the novel is a wonderful attempt; in short, this is the review. You can continue reading for a detailed review of the novel.

It starts with a middle-class Muslim family’s introduction in God’s own country – Kerala. We get to know family members of the unknown narrator who is the eldest of the children in the family. We only get to know the name of the narrator after a bulk of pages have been flipped – Iqbal. He is called Ikku by his family members. So, this narrator, who seems too worried to find someone to love, reaches Bangalore and almost forces his love on Rubina as soon as he finds she is a Muslim too. The narration might be amusing for the readers as the narrator is himself the central character and we get to know what he feels directly. Playing the religion card as politicians, thinking of a ‘polite revenge’ on his love, making the decision to be prepared for the consequences and so on… The arrival in Bangalore of a software engineer and messing directly with the helplessness of the freshers in the city of aspirations… the story moves and Iqbal starts loving Payal but they are afraid about their future as she is a Hindu. Payal’s father even gets ready for the marriage but Iqbal’s parents are rather orthodox and story shuns. Iqbal, now, is engaged to Naziya, a rather coy and ignorant girl who is never near the heart of him. And then, something happens which changes the story entirely and makes it very interesting. Iqbal has all the three windows open – he can choose either Rubina, Payal or Naziya. Something even bizarre happens and he sees people leaving him with excuses. What will happen next? Will the guy get his true Angel? Who is the true angel? Rubina? Payal or Naziya?

Verdict: Story is interesting, humorous, serious, and symbolical at times.

The plot, though good and somehow workable, isn’t so well constructed and it surely never matches the depth of the story. It could be bettered by the author but Irshad has done what he could. My True Angel is his first novel and he has done it fairly. Iqbal promises to be in touch with his friends before coming to Bangalore and they also promise the same. Once out – they are seldom seen (except for one time). Bharat and Harish almost fade into oblivion once Rubina and Payal share the scene with Iqbal. The plot, in short, just lets the readers read the story and because of the story’s gravity and depth, the novel runs. The plot might be a decoy (if you take it positive). Or the plot might be a junior partner if you take it critically.

Verdict: Plot lacks conviction and technique of fiction. It will get better as the author starts writing his next novel.

The narrative has been kept in the first person. The author has made the central character responsible to narrate the story and we get to know about the events as Iqbal saw it. Therefore, a reader might feel bemused when Iqbal thinks he is right in forcing his love on Rubina while Rubina denies him many times. Payal loves Iqbal the most but Iqbal thinks parting with Rubina was more painful than parting with Payal. Sometimes, the key points in the novel will be understood by the readers if they try to think what the other character might be thinking – not by Iqbal’s thoughts.

Verdict: Narrative part is okay. Better than the plot. Between story and the plot, narrative mediates fairly.

My True Angel will leave you in awe once you end the novel and put it aside. Though it lacks the techniques that maturer authors work with, the novel is certainly written with passion and fervour. The urge in Irshad to communicate his feelings and thoughts with the readers is wonderfully translated into his lines in the novel. The novel reflects and echoes the sentiments of modern-day youths. The demand for freedom in the terms of marriage and relationship is all valid and Irshad has said the same. He has also raised the issues around religion – which religion in the world stops us from loving another human being? The novel has many critical points to raise and they have been raised as well. However, the abstract and the physical, which is writing, has not gone hand in hand in the work. Though readers might like this work because of the genuine emotions and echoed sentiments, this work could be better in the terms of plot and narrative. Still, there are plenty of things in the novel which make it a perfect one-time read for the readers who often love to read something new!

I would rate it 4/5 because I cannot let my critical binocular escape the goodness in the work! You can surely enjoy reading this novel and let me tell you, My True Angel is a one-day novel – please start reading on Saturday and finish maximum by the Sunday – you will be elated and satisfied. It isn’t costly either.

Get My True Angel from Amazon – buy now

review by a regular contributor to Indian Book Critics

My True Angel by Irshad - reviewed

Irshad’s My True Angel is the story of a middle class Muslim youth who reaches Bangalore to find out many things he did never get to see or experience in his hometown because of the orthodox and conservative outlook. You will surely like his experiences and explorations.